You are here:
encaustic art 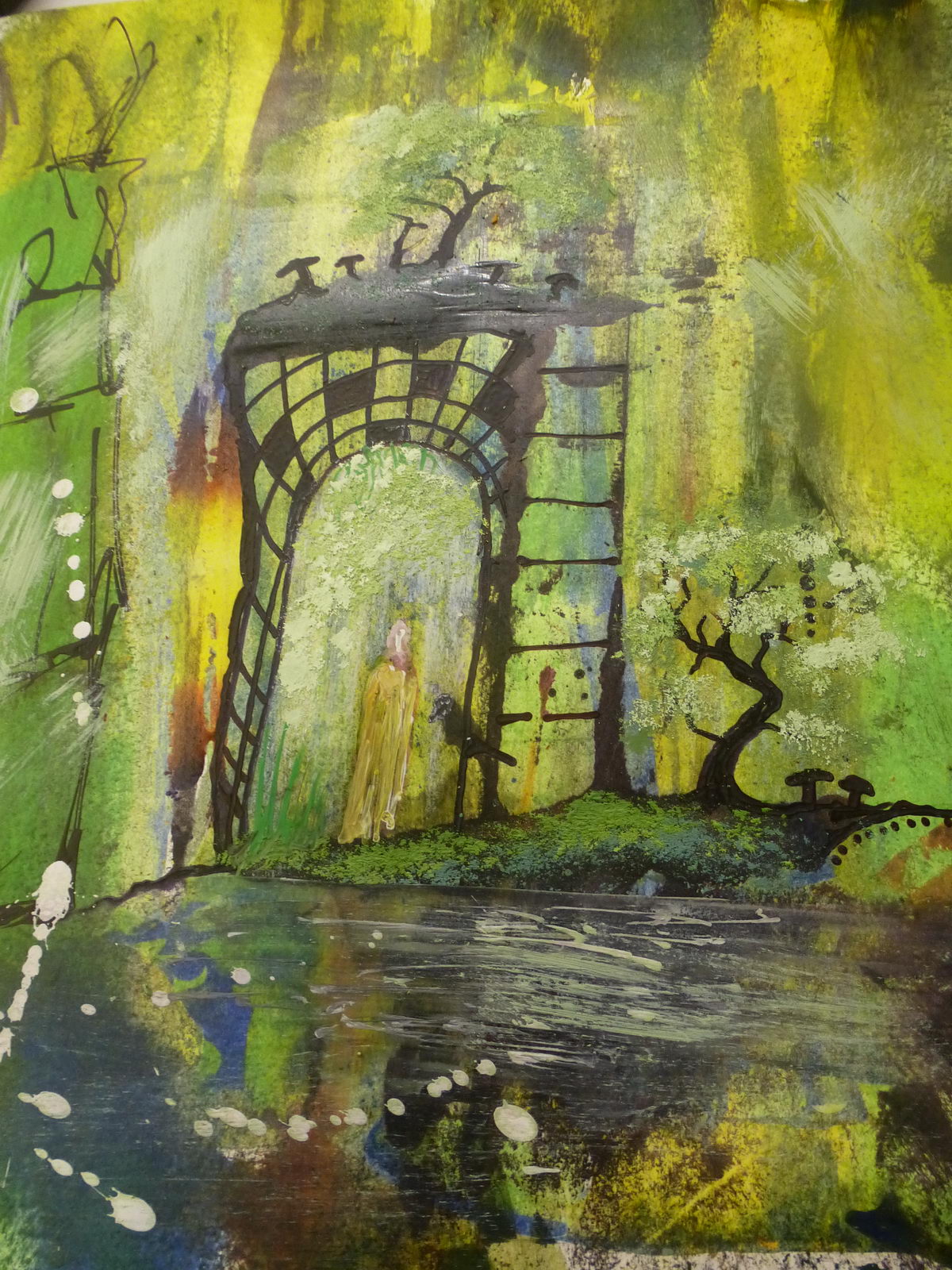 Disposable paper is used under cards being worked with encaustic art wax and the iron. When a new card or a card with different colour choices is started this backing paper is changed. Recently we have begun to stock pads of Workplace Paper, containing about 100 sheets of 443 x 322mm high absorbency paper. These sheets work for disposable use under your encaustic art creation  process, but because they are highly absorbent they are also good for various painting techniques. The simplest is to develop images out of the colours and shapes you get when using them as that disposable backing paper. Here is an example.

After creating a card I noticed some striking marks and areas of colour on the under-paper. I was using the Workplace paper pad and this is highly absorbent, so great for mopping up those ax colours that slide off the card during the iron strokes and movements used in the card creation.

I cleaned off the iron, added some brighter colours onto the base – yellow and leaf green, enough to become runny. Then tipped the iron edge down onto the paper close to the bottom, and with that edge pressing down solidly onto the paper I pushed the  iron up the paper something like a bulldozer might work. As the waxed iron edge moved over the paper it allowed absorption of the colours into areas where the paper was not yet saturated.This filled in between the initial dark colour areas with the lighter colour. A background for further development was formed.

Using the Stylus or Stylus Pro for the dark line work I added the grids, The gardener was developed with the stylus drawing tip too, based on a shape that was already there.the trees and mushroom silhouettes and generally developed the image. Water at the bottom was done with the iron edge and hogs hair encaustic art brushes were used on the upturned iron mini-hotplate to dab foliage onto those trees and into the back of the garden arch.

On one level it is just a doodle developed on some background workplace paper. On another level it is an artistic image which grew from opportunity, reaction and imagination. Without the random beginnings it would not have been conceived. Without sufficient skills to develop the image when reactions to the potentials occurred then there would also have been no result. And without imagination to remain open to ideas and potentials that came into view as the process unfolded there would also have been no result like this one. The point really is that art does not need to be preconceived. In fact, when the process is begun without any real concept of what the result will be there is a whole world of possibility to hand.

The thin protective workplace paper is highly absorbent. Wax can quickly saturate the paper, moving right through the fabric of  connected fibers. This is a photo of the back of the paper after completion of the front image. It has its own quality and character, almost a winter’s view of the scene, or perhaps just another day in the garden for that gardener?

What value does this piece of work hold?

Well, for the maker of it (me), there was the enjoyment of the process, the skills involved being exercised. These included not only use of tools but also all of the imaginative aspects. The initial recognition that there was potential in the under-paper markings. Imaginations and reactions to the various stages which led through development to the final image. And that image can simply be something that I find enjoyable and satisfying in some way. Or it could be attractive or stimulating for someone else looking at it.

And what is it worth someone might ask?
It is worth whatever value you find within it. Money is no way to value art. Money is a valuation of product. But art is an expression of quality more than a creation of product. That doesn’t mean art cannot be sold, but it does mean that the the valuation of the art is different than the valuation of the product. In the end, it is the observer of the art that will decide on its value. And the value of the art expressed may be very different to the value of the product some will see it as. Art dealers turn art into product – commodities for exchange with monetary valuation. If the maker (the artist) is dead then there is a limited availability of their product – no more can be created. Therefore dead artists, once lifted in favor, would find their works rising in financial value.

Enjoy the creative process and discover what value there is in your own work.
Don’t depend on others or on money to define those things.

This website uses cookies to improve your experience while you navigate through the website. Out of these, the cookies that are categorized as necessary are stored on your browser as they are essential for the working of basic functionalities of the website. We also use third-party cookies that help us analyze and understand how you use this website. These cookies will be stored in your browser only with your consent. You also have the option to opt-out of these cookies. But opting out of some of these cookies may affect your browsing experience.
Necessary Always Enabled
Necessary cookies are absolutely essential for the website to function properly. This category only includes cookies that ensures basic functionalities and security features of the website. These cookies do not store any personal information.
Non-necessary
Any cookies that may not be particularly necessary for the website to function and is used specifically to collect user personal data via analytics, ads, other embedded contents are termed as non-necessary cookies. It is mandatory to procure user consent prior to running these cookies on your website.
SAVE & ACCEPT